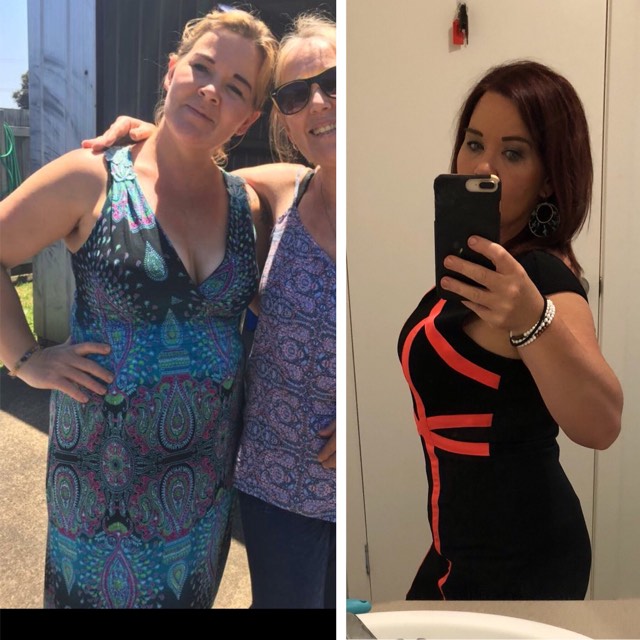 Mel lost 10kg in 60 days by giving up alcohol

Todays guest post is from Mel who has recently lost 10kg by giving up alcohol.

Mel and I have been Facebook friends for a few years now, even though we have never met in person. I have been following her #100 days alcohol free journey with interest. She posts daily updates to keep herself accountable. Mel’s posts are entertaining and inspiring.

I reached out and asked Mel if she would write a guest post about her journey and results. Lucky for us, she agreed.

Take it away Mel.

Over the last few years I’d been studying for a degree, which meant lots of sitting and a fair amount of stress. I hadn’t even realised my weight had become an issue. If I grew out of my clothes I just bought a larger size and didn’t give it a second thought.

I had been drinking daily to relieve the stresses of study and I was rarely exercising. This went on for almost 2 years. My weight had climbed to around 78kg (I’m a shorty).

I had never been this size without being pregnant, in fact 5 out of my 6 pregnancies I didn’t reach this weight at all!

On my 40th Birthday in June 2016 I decided I would start exercising again, but I did not make any changes to my eating or drinking routine.

I exercised almost daily for 6 months. I don’t mean going for a walk around the block. I GOT MY SWEAT ON!

If I took a few days off it piled back on. I was frustrated to put it mildly.

So I made an even bigger decision.

I finished my last beer on New Years and went for a dry experiment. I didn’t really make a lot of changes to the rest of my diet.

The lack of hangovers certainly helped with motivation to exercise though!

The things I focussed on were portion sizes, variety of foods from choices I liked the sound of, reading labels, increasing protein for satiety and muscle repair from exercise and choosing options I knew I could do for the entire family. I actually started using smaller plates and bowls and the food looked like larger portions too and this also helped not to over eat.

I swapped my alcohol for soda water and sliced lemon or lime with ice which I found refreshing also.

I still play around with my menus, being calorie aware rather than counting or worrying about calories burned. I make sure I get some exercise each day and keep busy.

I have never felt better than I do now.

Prior to this journey Mel consumed approx. 600  – 800 calories of alcohol each day and by her admission, more on weekends. By removing those calories (and not replacing them with anything else), Mel was able to create a calorie deficit, hence achieve weight loss.

This doesn’t mean that you need to totally give up alcohol in order to lose weight.

This is a story of Mel eliminating her weakest link.   Which I have written about in detail >>>HERE<<<.

Below are some gems of information I have taken on this journey so far:

10 things I have learnt from losing 10 kilos.

Take it away Mel…

1. I thought happiness would come from being smaller..

To a point this did happen for me, however taking up less space is only a small part of motivation once I got started. Just as my weight was changing, so did the things I wanted

If you see something that inspires you and want to achieve it, add it to your bucket list if you feel it’s achievable.

Also be willing to be brave. Expect setbacks, nothing is a straight line to success, learn from mistakes, use these to set future goals and most importantly ENJOY YOUR JOUNEY ALL THE WAY THROUGH!

During the journey I’ve found myself developing routines I can maintain long term. I filled up my menu with things I enjoy eating and keep me full, I carry my snack foods with me through the day so I’m keeping my hunger levels down and I’m also eating when I’ve given myself a chance to feel real hunger.

My attitude to exercise and eating well is not only affected by the quality of nutrients I eat but also how much sleep I get!

Lack of sleep interrupts my ability to prepare for my day.

My weight fluctuated throughout the process. I may find myself 2kg lighter on the scales after training hard, but when you refuel and as your muscles repair in the days following I gain weight even though my clothes still feel looser.

Take home message is the clothing is more reliable than the scales (but bloating will make your clothes tighter for a day during the time of the month regardless so wait it out).

5. If it sounds too good to be true, it probably is.

All social media claims to have the answer. The amount of life changing crap you can take notice of online is phenomenal especially when you feel desperate to make a change… doing your own research will make you feel empowered,

6. I involved my family in the journey

Getting into healthier routines doesn’t need to be something you do alone. In fact, it’s much more fun to involve the family and encourage them too to be active and learn the joys of eating to nourish and refuel their bodies.

I find myself taking the kids to go swimming while I train, then join them afterwards (mine are teenagers so I can). I also look forward to devising training plans I can do with my husband as well as walks. There’s no reason not to cook/prepare the same healthy meals for the kids.

7. My self esteem is more important than weight loss

when you find yourself on a positive path of health gain (I prefer this term to weight loss) there is no magic number on the scales that can replace your self esteem, confidence and self efficacy to stay on your path. It’s easy to get thinner, it’s hard to ‘feel’ better about yourself, so spend time working on this, it’s more important than losing weight is!

8. You don’t have to do what everyone else is doing

what works for me might not work for you, be willing to cater your plan to your needs, take into account your work, social and family commitments, don’t change yourself so much that you don’t feel like ‘you’ anymore, actually be MORE like you, and less like everyone else.

9. I reflected on my progress often

I found it motivating to see how far it is that I have come mentally, physically, emotionally. I know I have made an amazing effort to be healthier, instead of feeling badly that I still can’t get into those pants.

Take time to remember and appreciate all the effort you’ve made so far. Whether it’s a day, a week, a month or even a year, celebrate the small wins along the way, your body needs this positive reinforcement.

10. A lifestyle change not a diet

When I began this journey I had weight loss tunnel vision, it seemed to be all that mattered.

I’ve learned that weight loss is only a small part of health gain, when you make it about what you want, how what you’re currently doing lines up with your life goals and if you’re moving closer to them instead of further away, then you’re not on a diet, you’re on a life plan, and personally I think I’ve learned to work towards what I want instead of just dropping weight

Look not only at the weight loss but all the other things you will gain from the experience, and turn it into a positive journey instead of a time of punishment and restrictions.

Wow, thanks so much Mel for sharing your inspiring story.  I am sure your story will inspire and educate many others.

PS – If you want help with your fitness and fat loss goals I can help you with a 4 week step by step coaching program.

Mel has completed her 100 day no alcohol challenge. She is looking and feeling fantastic. Weighing in at 59kgs.

Check out that super flat tummy. 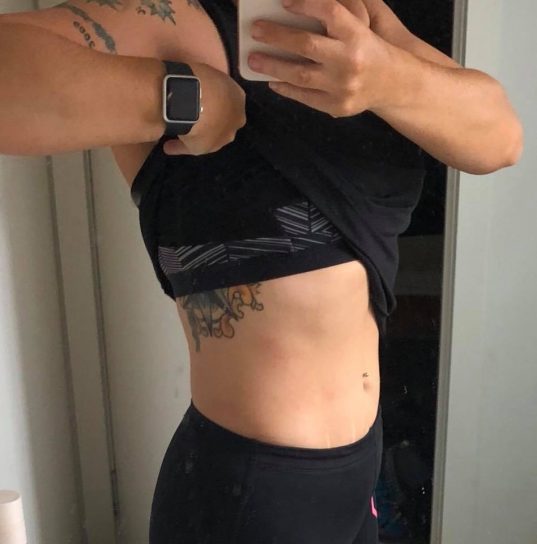